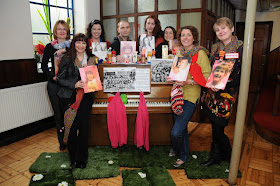 With 74 days left until Christmas, a surprise contender has entered the race to become Christmas Number One this year. Almost 30 years after they last topped the charts, innocent drinks have reunited the nation’s favourite grandma-lovers, 80s chart-toppers St Winifred’s School Choir to celebrate the 6th year of their Big Knit charity campaign.

Now mostly in their 30’s, the choir will be reformed as The innocent Big Knit Choir to re-record a 2009 version of their chart topping song ‘There’s No One Quite Like Grandma’. The song which originally rose to fame in 1980 and knocked music legend John Lennon off the number one spot for two weeks will be re-released this November as the Big Knit charity single. All monies raised from the single and innocent hatted products will go towards this year’s target of raising over £250,000 for Age Concern and Help the Aged.

Ten of the original choir members, who now include a police detective, an HR consultant and a mortgage advisor, will make up The innocent Big Knit Choir including:

Former X-Factor vocal coach Annie Skates, who has worked with artists including Elton John, Beyonce and Girls Aloud, will be ensuring The innocent Big Knit Choir sound pitch perfect and the re-release is produced by Darran Bennett, who’s publishing work includes artists from Fleetwood Mac to Britney Spears and as a producer took Holly Valance to Number One with ‘Kiss Kiss’.

To find out more about The Big Knit Choir, log onto www.innocentdrinks.co.uk/bigknitchoir

About The Big Knit charity campaign

Every year, the Big Knit sees members of the public hand-knit woollen hats for innocent Smoothies and Squeezies, and woollen warmers for innocent Veg Pots. For every woolly product sold in Sainsbury’s stores, innocent and Sainsbury’s give 35p to Age Concern and Help the Aged, supporting healthy eating and living projects for older people this winter.

innocent founder Richard Reed said, “Grandmas are the
cornerstone of the family and many contribute their time and wool every year to our Big Knit campaign – helping keep older people healthy and nourished at winter time. We wanted to raise even more money for this year’s Big Knit campaign and what better way to celebrate older people everywhere than by re-recording ‘There’s No One Quite Like Grandma.’”

For more information or to interview a member of the choir, please contact the innocent team at Frank on innocent@frankpr.it or on 0207 693 6999

• Innocent behatted smoothies, veg pots (*new*) and kids squeezies (*new*) will be on sale in Sainsbury’s nationwide from 4th November.

• To date the Big Knit, has raised over £600,000 and the initiative sees members of the public and Age Concern volunteers knit woollen hats for innocent Smoothies and Squeezies, and woollen warmers for innocent Veg Pots. For every woolly product sold in Sainsbury’s stores, innocent and Sainsbury’s will give 35p to Age Concern and Help the Aged.

• There's No-one Quite Like Grandma was originally a number one hit single by Stockport-based primary school choir St. Winifred's School Choir in 1980. It was the Christmas number one single in the United Kingdom from 27 December 1980 - 3 January 1981. The song was written by Gordon Lorenz.

• It’s a sad fact that in the UK, 1 in 10 people over the age of 65 are malnourished. So when it’s nippy outside, it’s even more important for older people to look after themselves and make sure their bodies are in tip top shape.

• For every behatted smoothie, veg pot or squeezies sold in Sainsbury’s stores, innocent and Sainsbury’s will give 35p to Age Concern and Help the Aged.

• The monies raised will be used to support healthy eating and healthy living projects for older people. These include advice centres offering information on healthy eating as well as cooking clubs and get-togethers where older people can sit down and enjoy a meal in each other’s company.